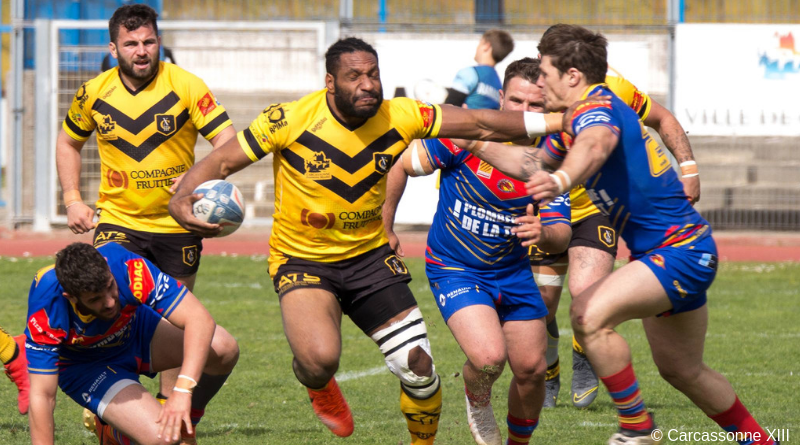 Rugby League shined in Carcassonne for the Magique Week-end

The French version of the Magic Weekend was introduced in 2010 and survived four years years until being shelved for a few years before being reintroduced in 2017 by Marc Palanques.

The 7th Magic Week-end followed the same format as before with the fixtures arranged so that the 1st plays 2nd down to 9th playing 10th place and so on. The big difference is that a victory brings four points so plenty to play for. Each game has two referees looking after the games.

The opening game of this year’s competition pitched the last two league teams SO Avignon against an ever improving Toulouse Broncos. This was always going to be a close affair and it didn’t disappoint. This was the classic game of two halves as Avignon welcomed back the influential Joris Bissiere at stand-off. Toulouse with its juniors were bolstered by the addition of some experienced Championship level recruits. The champions looked relaxed as they built up a handy 14 point first-half advantage rattling three converted tries plus a penalty. The Broncos came back strongly in a tense second period and just fell short as Corentin Rey dived in with the four-pointer and Bissière held his nerve to to win the game with five minutes remaining. Renaud Guigue’s Avignon claimed the victory by two points to keep his team’s top six place in sight.

The second game of the afternoon saw a high scoring encounter between Palau and the inconsistent St Gaudens. The Catalans had the better of both halves despite losing three players to yellow cards and raced to an impressive lead at the interval thanks to three tries, two conversions and three cheaply conceded penalties offered by an indisciplined St Gaudens outfit close to the posts. St Gaudens came back in the second half as Palau seemed to relax allowing the Catalans to get within six points with a quarter remaining but Palau woke up and late four-pointers from Flovie and Lardot saved their blushes. Palau put themselves in a good position to attack fifth and six places with a well earned four league points.

The final game of the first day saw the third and fourth places play each other. Lezignan v Limoux is always a big fixture and the four points on offer allowed either side the chance to top the table until the top-two clash the following afternoon. So all to play for in what was always going to be a close game. The Grizzlies opened the scoring in the third minute as Romain Puso crashed over but winger Dorian Gouzy scored in the corner before the end of the first quarter. Limoux reached double figures through two penalties but kiwi Bernard Gregorious try and Mikaêl Tribillac conversion made the scores all square at the interval. Anthony Ors gave FCL the lead for the first time on 56 minutes and Tribillac added the goal plus a penalty shortl after to extend the lead. Limoux pushed hard and managed to cut the deficit to only four points in the last two minutes but Lezignan held on to a close victory to claim top spot.

Fifth and sixth places kicked off the second day of the feast of rugby producing the highest scoring game which isn’t surprising as their three previous meetings this season, two n the league and one in the cup produced big scores. The first period produced a see-saw contest with both sides managing two converted tries apiece to provide the half time stalemate. The second forty was a different matter after a brief success from the men from the Lot as Lafolafo mamnged to give his side a brief lead two minutes in, as the Tigers blitzed the Leopards with five tries in 17 frantic minutes. Rinaldi’s side had no answer to the power show but did manage a consolation try to take home close to the end. This was an important four points for the Mazicou side with a top six place still very much wihin their sights.

The clash of the giants ended the weekend’s entertainment and it was a contest where Carcassonne always had the upper hand but with the visitors never completely out of touch. The four points lifted the hosts to the top of the table overtaking FCL who enjoyed a few hours at the top. Carcassonne always had the edge and took the lead on eight minutes through Vincent Albert with Alexis Alberola adding the extras. The home side then doubled their lead with Luc Franco nipping in twelve minutes later with Alberola again obliginf. Both sides down to twelve as Khedimi and Margalet seeing yellow.Alberola added a penalty just after and Corentin Le Cam cut the deficit after the half hour. The quickfire Garry Lo showed the difference in class with a fifty metres sprint to the line as the hooter sounded.
Ben Pomeroy helped the Catalans cause just after the interval and Margalet scodes his second conversion to cut the lead to a deceptive six points. The game became more evenly balanced before Albert ad Lo scored their second tries respectively on the hour. This seemed to be te killer double blow though the Catalans did come back at the end through late tries from Pomeroy and Romain Franco but it was too late as Carcassonne cruised to a well deserved victory.