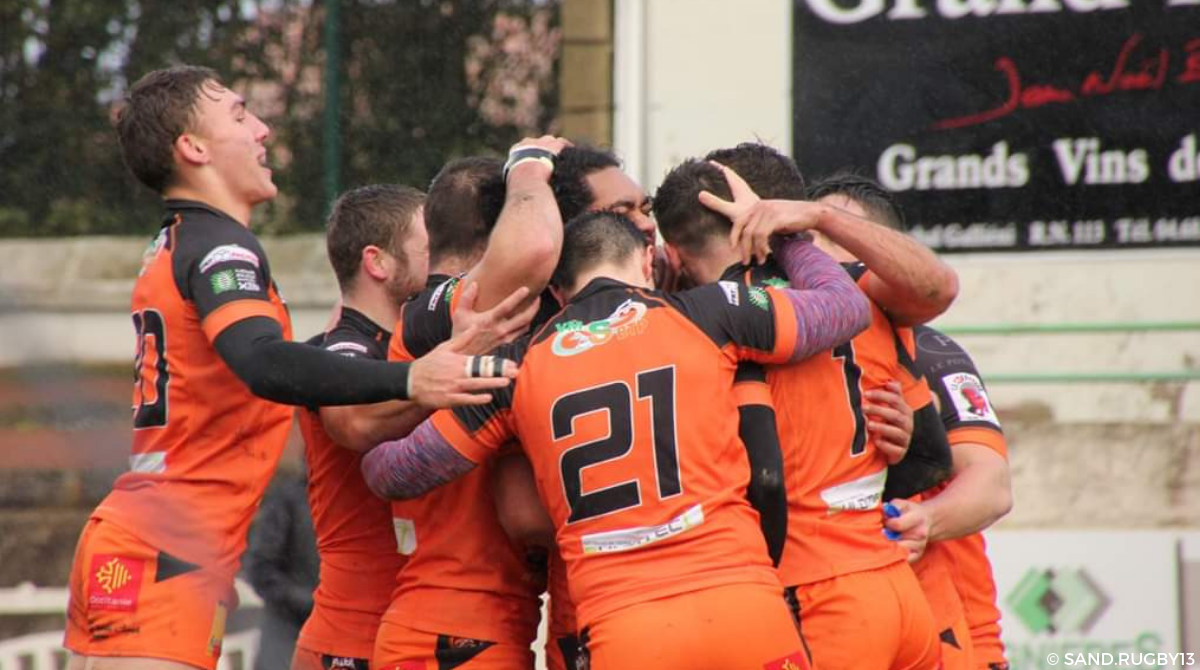 Fabre and Albi too strong for Limoux

Albi continued their erratic form as they hung on to win a game they dominated but almost lost at The Mazicou against an under par Limoux outfit.

Albi fully deserved the points as they shocked the visitors with rapid line speed and individual brilliance mainly from man of the match 18 year old Baptiste Fabre. Fabre looks a good prospect even spending time with the Leeds Rhinos last summer, he is highly rated and his self-assured attitude adds stability to the side. He’s keeping out new signing Morgan Carensac with a series of dominating performances.

But it was Limoux who shocked the home crowd after only two minutes with Romain Peault running strongly to score in the right corner, veteran Mikaêl Murcia missed the touchline kick. Albi too the lead on 10 minutes after a good move ended with Fabre diving in the corner and then kicking the tricky conversion. Two minutes later The Grizzlies retook the lead with Mathieu Mayans nipping over in the right corner, Murcia again missed his kick. The match tilted gain towards the hosts on 16 minutes as Fabre and Theo Guinguet combined to feed winger Florian Deburghraeve to dive into the right corner Fabre repeated his previous touchline two-pointer. Albi were flying as Limoux flagged and conceded again on 19 minutes after Pierre Carivenc fed Alex Grant with time to spare to score close to the posts, Fabre obliged yet again as the lead became worryingly larger for coach Maxime Grésèque. Four minutes later and Fabre added two more points with a cheap penalty under the posts. Albi dominated and Limoux looked shaky and even a Grant fumble under his posts couldn’t be taken advantage of. The hosts extended the lead on the half-time hooter as Grant exploited a Limoux error on halfway, his rapid run ended with a feed to prop Axel Rodrigues who scored close to the right upright. Fabre ended the half with the easy conversion as his team went to the break with an 18 point advantage.

Albi continued their attacking attitude second half but it was Limoux who took advantage of 12 men Albi as William Ousty was yellow carded ten minutes in. Yann Belmaaziz crossed over unapposed under the posts, Murcia converted. Three minutes later as Albi relaxed Murcia sprinted 25 metres to score left side. This time he couldn’t add the extras. Limoux closed the lead to only six ponts on 67 minutes as the hard working Mourad Kriouache, who had been on as hooker since the early injury to Sylvain Texeido ran through close to the posts as the home defence looked on. Thomas Lasvennes converted. Albi hung on and assured the victory with four minutes remaining as Fabre kicked another penalty. The Tigers added a late try in the left corner from Nitim Pedrero as the hooter sounded which saw two Grizzlies sin-binned for dissent following some contentious reffing decisions late on.

All in all a good victory for Albi and disappointment for Limoux who managed to hang on for a bonus point.